I’ve been in Streetboarding a long time. 22 years to be exact.  I’ve seen many people and companies come and go during those years, and also collected a hell of a lot of T-shirts made by them.

A little while a go I was back at Papa Nowman’s having a rummage in the shed.  Man.  I should turn it into a Streetboard Museum.  From old issues of Trout, negatives from some trip deep in an European country that I can’t remember the name of, to a sack full of t-shirts.

As I pulled each out they all told a story. Stories long lost to time, some of a dream never realised, some that made  those of us still involved the men we are today.  I’m gonna share those stories periodically.  Because I’m The Captain and I can. 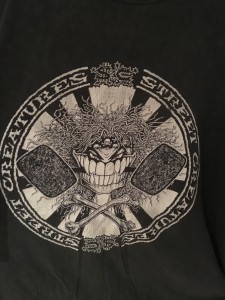 Let’s start at the beginning and the top of the list.  This was one of the first Streetboard shirts, a classic and I probably wouldn’t be here writing this if it wasn’t for the man who designed and produced it.

Mark Campbell was the first person to sell Snakeboards in the U.K. at Hamleys toy store, London.  Circa 1994 he produced this T-shirt, with the figure on the front based on the none other than early Vert destroyer Gadget Ruiz. 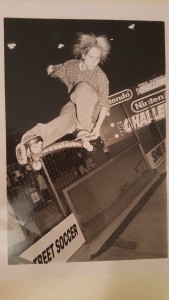 Back in the day,  me and my crew would visit Mark to get free stickers and check out the latest videos that he always got before anyone else.

We’d of course jump on the demo boards and have a cruise around floor, unwittingly helping him to sell more boards.  His record in one day was close to 100. 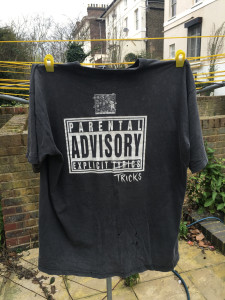 The back of the shirt was subsequently ripped by the Trout crew and features at the beginning of the 1990’s classic Hellburger video. 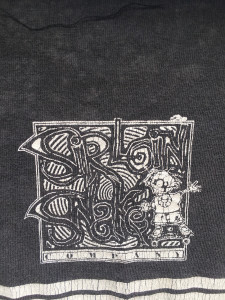 On the back is this little figure, something I don’t really remember, but I’ve asked Mark about it and is a story for another day (RP6).

Mark is part of True Skool history.  He gave myself and Stef our first jobs running the in-store Hamleys radio station, as well lending The True Skool the cash to become the first distributor of Dimension Streetboards in the U.K.

You all owe a debt to this incredible man, who also has a place in London’s rock heritage. Ask me about that, or better ask him, he’s still at Hamleys. The stories are worth every last drop of Jack D that you’ll end up ploughing through.